September is very much going to be a month of tidying up loose ends and trying to get projects such as A Gallery of the Imagination, close to fruition as well as planning the music for the North American tour which will include spending time programming a couple of keyboards which I will use as well as the grand piano which will enable me to include different pieces and some different relevant stories!!

It's going to be a very different America this time around and health and related safety is a priority for all concerned. As far as I am aware all the meet and greets are going ahead but we will be observing all the necessary distancing and if required, face masks. (There is a widely held view by some people that I should wear a face mask at all times so as not to scare people!!)

I am so looking forward to performing on stage again. I've missed it terribly and it will certainly put a musical smile back on my face.

We have been making plans for next year and indeed 2023, but there's so much now to look forward to for the remainder of 2021 including the new album, the second series of Rick's Plaice, the USA tour and The Xmas Even Grumpier UK tour!

On the personal front, our third rescue dog has arrived from China where she was saved from the horrendous meat trade, she is adorable and getting on famously with our two Bosnian rescues… however, the cats still rule and boss the dogs around… no fighting and quite harmless and hilarious to watch.

Some of you may have seen this ad from way back on Twitter and I did announce that it had a story attached to it and I would explain that in the September GORR… and so here we go! 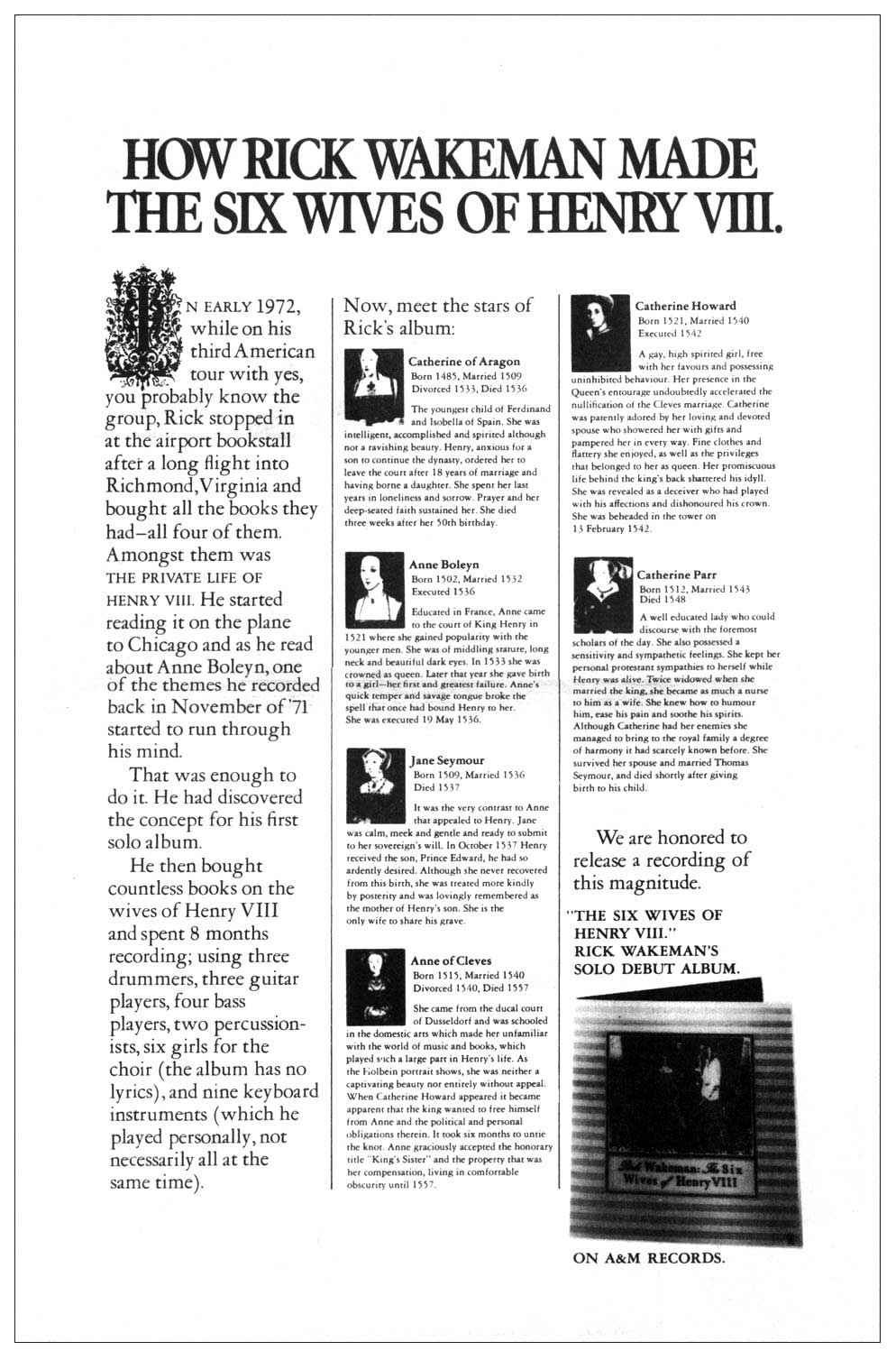 When The 6 Wives was released in January of 1973, the reviews (few as there were), were not good. The music press hated it, newspaper reviewers hated I and also radio refused to play it. I will admit to being very upset at the time. I was very proud of the album and the work that so many had put into it to make it happen.

A&M Records were at their wit's end trying to think what they could do and then 2 great guys, Tony Burdfield and Terry O'Neill, who were both in the promotion department at A&M came up with the idea to produce an advert that looked like an article and that's how this piece finally appeared. The interviewer was Johnny Walker of Sounds of the Seventies fame, (still a great friend of mine and a fabulous guy).

A&M then placed the advert/article in as many journals as they could by buying space. Extremely clever thinking. There is no doubt that alongside the Old Grey Whistle Test appearance, it played a massive part in letting listeners decide if they liked it or not and not reviewers telling them what they should like!!

The October GORR will preview the USA tour and the November GORR will be written whilst the tour is happening so there will be an up to date report.

I really hope many of you can make a concert or two… it's why I do them!… It's so great to meet up with old friends and make new ones.