Rick Wakeman is at his best in front of an audience, as we're sure many of you know. This page contains details of all forthcoming performances worldwide. We also try where possible to list appearances on TV and radio. 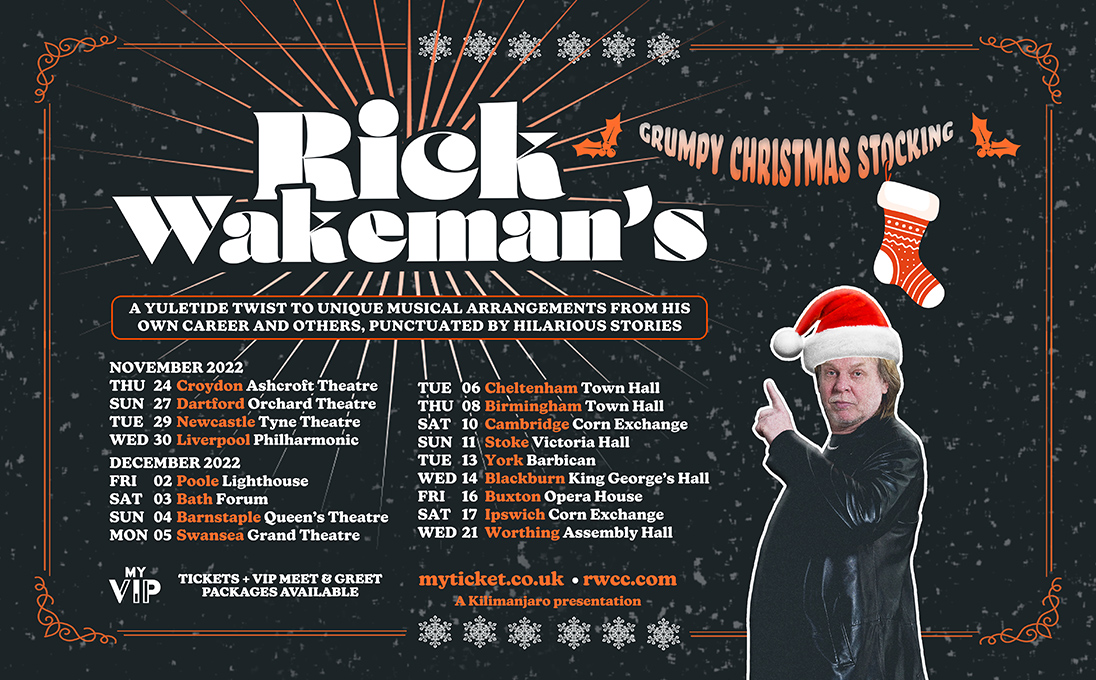 Rick's Grumpy Christmas tours are now as traditional in the festive season as mince pies and pantomime (oh yes, they are…) and 2022 is no exception.

Audiences can expect music taken across the breadth of Rick's career, from his work as keyboard player in legendary prog rock band YES to his solo career and session work, plus covers given an unexpected twist and festive tunes uniquely rearranged Wakeman style, performed on grand piano and electric keyboards. All of this musical virtuosity will, of course, be punctuated by Rick's typically ridiculous stories, which, as he himself states, always contain an element of truth – it's up to the audience to decide how much!

This year, Rick's Grumpy Christmas Stocking Tour will be taking him to some cities of the UK that he hasn't visited for several years, kicking off in Croydon on 24 November before visiting Dartford, Newcastle, Liverpool, Poole, Bath, Barnstaple, Swansea, Cheltenham, Birmingham, Cambridge, Stoke-on-Trent, York, Blackburn, Buxton and Ipswich before concluding in Worthing on 21 December.

It's just been announced that Rick Wakeman will be taking part in The '70s Rock & Romance Cruise in March 2023 in a line-up which includes Don Felder (formerly of The Eagles), The Hollies, The Orchestra starring former members of ELO, Jefferson Starship, Foghat, Climax Blues Band, former Journey lead vocalist Steve Augeri and many more. The Cruise will take place 16-23 March 2023 from Miami to Puerto Plata, San Juan and St Croix (USVI) on the luxurious Celebrity Summit. For more information, please visit www.RockAndRomanceCruise.com

These are the tours that have been listed on RWCC since 1996. For earlier dates, you can try setlist.fm

In addition to the above formal tours, this is a list of one off dates.

These tour programmes are presented as PDF files. My thanks go to the contributors of these programmes.