September seems to have come and gone at a rate of knots and already we are into October and Xmas seems to be looming ever closer!!

Journey to the Centre of the Earth in Tenerife in December has finally had to be postponed for reasons given in last month’s GORR but it is hoped that all that we have had to postpone will soon have new dates set by early in the New Year.

October still has its fair share of things happening and it is the last two months of the year which have been heavily culled to allow me to really get to grips with health, weight and creative time for 2016.

On Monday 5th I did give a lecture at St Brides Church in Fleet Street where I was given free rein to vent my anger and frustration as to what has happened to the music industry that means so much to me. If there were ever any doubts as to whether or not I am a Grumpy Old Man, then the 2 hours I spent at St Brides doing the Tom Olsen lecture certainly clarified the situation!

On the 6th I recorded the Vintage TV Xmas show with co host Jenny Powell and I think the ideal expression as regards the day would be....it was a hoot! Somebody actually said we were the new Mel and Sue from Great British Bake Off, which is a little worrying as they obviously didn’t spot that I was actually a male human!
Thursday 8th is a day of rehearsals in Gateshead with Sir Tim Rice for his concert at the Sage that evening where I will be performing with Emmie Beckitt who will be singing The Hymn from 1984 with orchestra and choir and also with Siubhan Harrison performing Julia for the same album. It’s always a joy to be involved with anything that Sir Tim does and the Sage is such a great venue.

On the 11th at midday I will be doing a live audience with...errrr...me.....at The Sway in Gt Queen St in London just off of Drury Lane. All proceeds in aid of the Water Rats charities so I’m hoping there will be a lot of people there. I should also point at that in early advertising it said that this was going to be streamed and available on line, but this is not the case so the only way you’ll hear my ludicrous answering of questions is to be there!

On the 16th and 17th I will be performing at The Priory in Lancaster with the Priory Choir and a very talented young chorister called Lizee Weedy. It’s a mixture of all sorts of music plus some I’ve not done for year and with a choir enables me to do so. I might well give their organ a pounding as well!

Also performing will be my great pal Gordon Giltrap so a fun couple of days seems to be looming for all concerned.

Then on Monday 19th I fly to Prague. A city I adore and will be performing two piano concerts. First in Prague itself on the 20th and then on the 21st in Brno.

On the 23rd I’m part of a lecture on music which is taking place at the Charing Cross Theatre in London. I don’t know it it’s open to the public but will post if it is on the website as soon as I know.

The Christmas EP with Emmie Beckitt and myself is now finished, mixed and mastered and whilst I will admit that I am biased, it is wonderful. Those in the media who have had a sneak listen have genuinely raved about it and already personal radio appearances are mounting up for Emmie and myself which is great news.

Another mention is for my great friend Martin Hudson, who for many years ran the Classic Rock Society. He’s written a book of which I did a foreword for, and it is coming out shortly. It’s a great read and an important historical document for all things prog and classic rock. 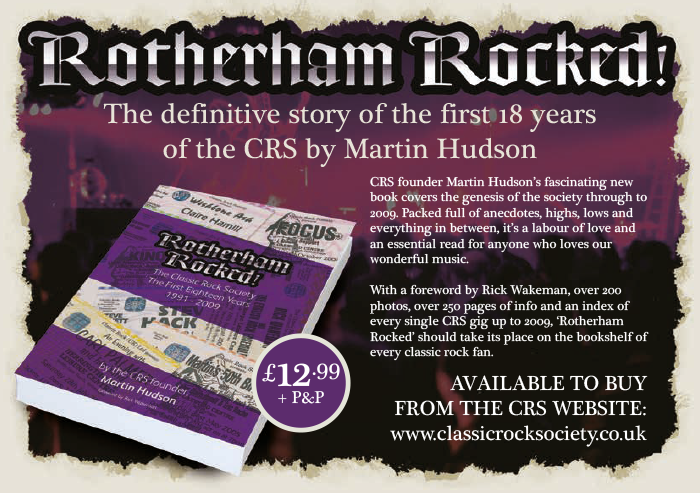 Enjoy the rest of the month and there should be some interesting news to relate next month and December, so keep logging in to the rwcc website!