I know...February is late!!!....so I’ve combined it with March and hopefully will be able to cover a lot of ground!

Piano Portraits has exceeded all my wildest dreams spending 3 weeks in the official top 10 UK album chart and to date 5 weeks in the top twenty. I have been overwhelmed with kind comments and reviews and it has been totally responsible for the upcoming two legged Piano Portraits tour which commences in May with the dates already on the site, (many of which I am told are already sold out or close to being so).

With demand being so good, we're hoping to announce more shows for later in the year, keep an eye on the website and Facebook for details.

To recap a little as regards February, I did two piano shows in Italy in Trento and Udine and they were great fun and thanks to all who came along and supported the concerts. There are more piano shows coming up in Italy in May and these are ..

On the 21st The Grand Order of Water Rats hosted a Royal dinner for our Royal Companion Rat Prince Michael of Kent and his son Lord Freddie Windsor and as you can see from the photos, a great time was had by all.....For a fun quiz, see how many of the other people in the photos any of you could name? 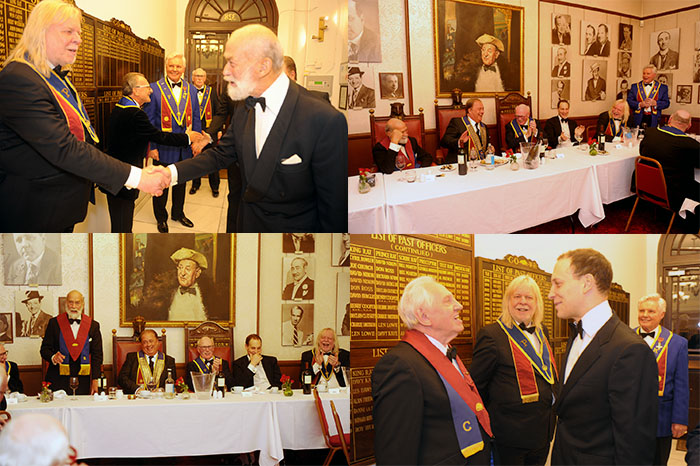 At the end of this month I will be doing a final check on my keyboard rig before it flies off to Israel for the ARW concert on the 7th of March. There have been one or two keyboards replaced that sadly we were unable to get working after the tour to a level that we could trust they would behave themselves for the upcoming battering they are soon to get!

We now move into March and on the 1st I will be at The Granary and will be recording Children of Chernobyl for a short DVD which will be the cover-mount for the Piano Portraits programme. We have uncovered some footage which we will put the music too plus a filmed introduction by me.

I will also be recording two bonus tracks for the re-release of a re-mastered Country Airs and finally some demos of the pieces that myself, Dave Colquhoun and Matt Pegg will be doing at the Cheltenham Jazz Festival on the 29th of April.

I then fly off to Israel for rehearsals with ARW and the show in Tel Aviv on the 7th returning home in time to pick up a change of clothes and head for Cardiff for the ARW tour.

Just to whet future appetites, (or not as the case may be), I have so far had offers in to do the Piano Portraits tour in the Canada, Australia, New Zealand, USA, Italy & Portugal. The problem I have is ...when?....as with the 50th anniversary of YES happening next year I would imagine that much of that year will be taken up with ARW touring although I’m sure there may well be time to slot some of these Piano Portraits tours in.

The Granary annual Wakeman Xmas Concerts are booked for the 15th and 16th December. These sell out fast and are a great fun event.

I look forward to seeing many of you over the coming touring months and once again thanks to everybody for the wonderful support with Piano Portraits,